The City of Cambridge has announced the opening of the new Timothy J. Toomey, Jr. Park in East Cambridge, located on Rogers Street between Second Street and Third Street. The opening of the park is a milestone in the City’s efforts to simultaneously design and construct three new parks in the East Cambridge neighborhood. The city held a dedication ceremony on Saturday, October 2, 2021. 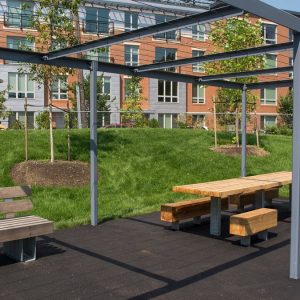 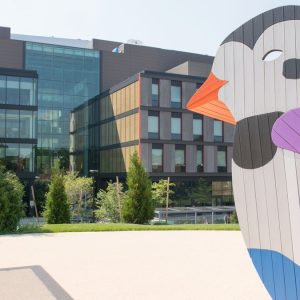 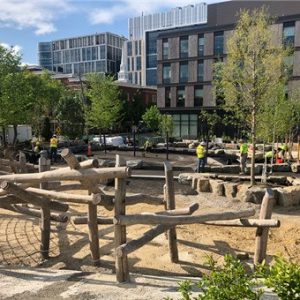 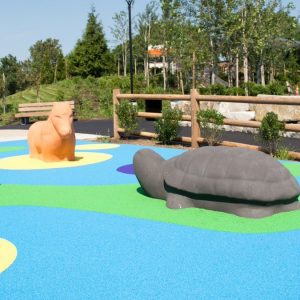 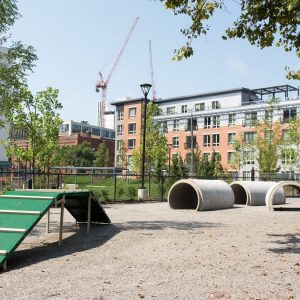 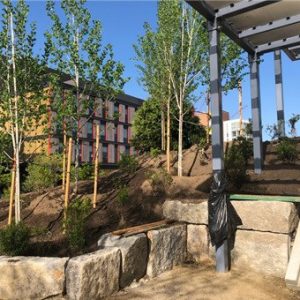 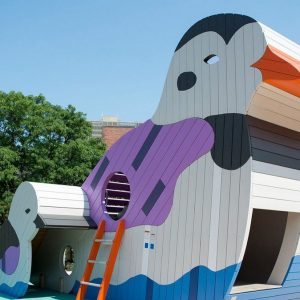 The new park features a play area designed for children of all ages, including a tot area with animal play sculptures and water and sand play areas near the Rogers Street edge of the park. A gradually sloping paved pathway winds up the constructed hill on the eastern portion of the park, where children and caretakers will find a variety of play features: basket swings, a wooden climbing structure, and slides embedded in the hillside beneath a shade structure.

The top of the hill features a whimsical playhouse modeled after a piping plover designed by the playground equipment creator MONSTRUM, which specializes in artistic playground designs.

The park also includes a newly constructed dog run, replacing a temporary facility that operated on the site prior to park construction.

A large open-air green is located at the center of the park, consisting of a flat area for field sports and a sloped lawn that can serve passive uses, or double as a sledding hill in the winter. There are three picnic areas located off of the park pathways and benches throughout the park. The park is extensively planted, with over 150 new trees as a part of this project, and planting areas are lined with boulders donated to the project by DivcoWest.

The park project also includes notable infrastructure features that will provide benefits to the wider community. One such feature is a charging and storage area for electric park maintenance equipment that made creative use of the newly-constructed hill. “The Department of Public Works is committed to deploying efforts to reduce the city’s environmental footprint in our park maintenance—not just for Toomey Park, but in other parks in the eastern part of the city as well,” said Public Works Commissioner Owen O’Riordan. “Having the necessary infrastructure to support green initiatives built into the project from the beginning will facilitate our crews’ abilities to conduct park maintenance while reducing our carbon footprint.”

The park also features an extensive subsurface stormwater infiltration system. During large storm events, stormwater from the park and surrounding streets are diverted to this system, which is designed to capture and infiltrate over 76,000 gallons of water, helping to improve water quality by reducing runoff during storms.

“It’s not often that we are able to build a new park from the ground up in Cambridge, and the team and community embraced the opportunity to make Toomey Park a space that both supports our work on resilience and sustainability and emphasizes creating spaces for neighbors to play together and connect with each other,” said Assistant City Manager for Community Development Iram Farooq. “This is truly a community effort. We’re excited to celebrate the new Toomey Park with neighbors and community members.”

Publicly accessible restrooms are available at the 75 Binney Street building across Rogers Street from the park. Metered parking is available on Second Street or Rogers Street. The park is open from dawn to dusk. The design of the park was led by landscape architect Michael Van Valkenburgh Associates. 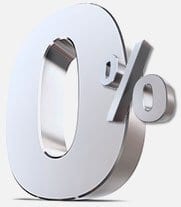